You are here: Home>Soldiers>Frank Edwards 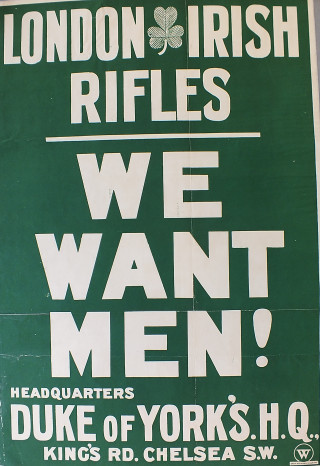 Frank Edwards was born in 1892 and grew up in Chelsea. He was working as a stationer’s assistant when war was declared in August 1914. Three days later he joined the London Irish Rifles whose headquarters where on the King’s Road, Chelsea.

After training, Rifleman Edwards was sent to France in March 1915. He loved football and always kept a deflated leather football under his tunic, seizing every opportunity to play a game. On 25 September 1915, Edwards waited to go over the top on the first day of the Battle of Loos. Without his officer knowing, Edwards inflated his football and threw it out into No Man’s Land, just as the London Irish attacked. He wanted to dibble it toward the German lines to help keep the attack going. Almost immediately, he was shot in the thigh and badly gassed. Evacuated to hospital in England, he took two years to recover.

He re-enlisted in the Military Foot Police, was promoted to Sergeant and served until 1935. Controversially, his spirited exploits were not recognised. Instead, the British press attributed them to an officer of his battalion and only recently has his story been told. The ‘Footballer of Loos’ died in 1964.