You are here: Home>War Game by Michael Foreman>War Game: the book 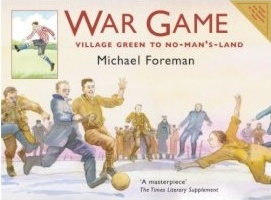 It tells the story of four friends, Will, Freddie, Billy and Lacey, who don’t want to miss out on the adventure of the First World War. Sadly they soon realise the grim realities of war and the sacrifices made.

The main characters are all based on Michael Foreman’s uncles who all died in the First World War.

Explore the rest of this site to: