You are here: Home>Soldiers>Bernard Brookes 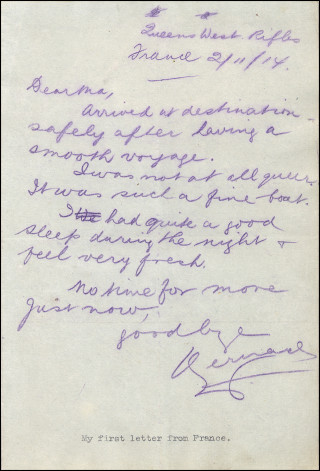 Bernard Joseph Brookes was born in Camberwell, London, in 1893. Aged just 21 he joined the Queen’s Westminster Rifles when war was declared in August 1914. He trained at Leverstock Green and became a signaller. He embarked for France from Southampton on board of the “Maidan” on the 1 November 1914.

We know he witnessed the Christmas Truce because of the diary he kept on his journey to France and at the front line. He took part to the British attack at Hooge on the 9 August 1915, attempting to recover trenches that had been captured by the Germans using flame throwers. On that day, a shell burst above Brookes’ head and threw him to the ground. Although he had not been hit, he was to be forced to leave the trenches and return home.

He was brought in an ambulance to Camiers and from there was transferred to England to the Saint Anselm’s V A D Hospital at Walmer. In his medical report it is written that he suffered from a slight neurasthenia (nerves shock) as a result of heavy bombardment. The following day the Prime Minister of Canada Sir Robert Borden visited the hospital and made an important speech. On the 9 September 1915 Brookes took part in a fishing competition which was held for 103 wounded soldiers, in which each partaker received a prize. In his diary Brookes specified that he gained a nice box of handkerchiefs.

On the 19 October 1915 he left the hospital at Walmer and transferred to the Central Military Hospital of Shorncliffe. On 29 November he was informed that he was to be transferred to the Military Convalescent Hospital, Woodcote Park, Epsom. He was later promoted to the rank of Sergeant and then to finish his military career in the Epsom Downs.

You can watch and animated film based on Brookes diaries here.