Women's football and the First World War by Jordan Straight

A line-up of the Dick, Kerr's Ladies, taken in 1921. Lily Parr is on the far right.
Wikipedia 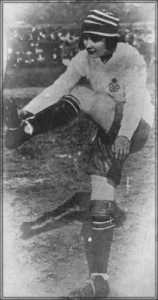 At nearly six feet tall and known for her strength, she was said to have a kick as strong as any man.
Wikipedia

In the later years of the First World War and in the years following, women’s teams became more and more common. Unlike the men’s football teams, women did not play to make money for themselves, they raised money for charity. The money they earned for the games went mostly to the veterans’ hospitals to pay for soldiers who returned from the war and were no longer able to work.

One of these teams was the Dick, Kerr’s Ladies, located in Lancashire, who were sponsored by the Dick, Kerr Company (today known as English Electric). The team consisted of factory girls who started kicking a ball around during break times to get rid of some excess energy. Eventually, a man named Alfred Frankland who worked for the Dick, Kerr Company took it upon himself to form a team to represent his company. He began going to games and enlisting the strongest players from the opposition to play for Dick, Kerr. The result was one of the most successful women’s teams of all time. Playing a total of 828 matches, the Dick, Kerr’s Ladies only lost 24 games and drew 46.The Ladies played teams from all over England and even in France, and they attracted massive crowds that sold out stadiums and helped take care of British war veterans.

One player for Dick, Kerr’s was Lily Parr, who is the only female footballer in the National Football Museum Hall of Fame. Standing at almost six feet tall, she was known for her powerful kick that was said to be just as strong as a man’s. In the years she played football, she scored over 900 goals, making her one of football’s most prolific goal-scorers.

In late 1921, the Football Association banned women’s teams from playing on official Association pitches, claiming that football was not a proper sport for women and was not good for their health. Although upset by the FA’s decision, women all over England kept playing. They continued to attract large crowds that eventually drew international attention. In 1922, the Dick, Kerr’s Ladies toured in the United States. They played men’s teams, because America did not have professional women’s sport teams during that time. Of the nine games they played, they won three, drew three, and lost the other three.

After the Dick, Kerr Company dropped their sponsorship of the Ladies, they were renamed the Preston Ladies, and the team kept going until 1965. The Football Association finally dropped its ban in 1970, but the effect that Dick, Kerr’s had on women’s sports still remains today.