Indian troops at the Christmas Truce 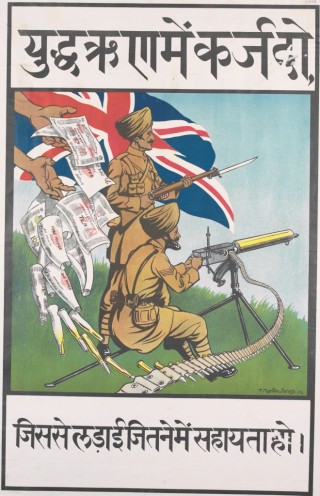 Soldiers recruited into the Garhwal Rifles are from the Garhwal Hills, which is arguably one of the most beautiful areas of the Himalayas. These men are known for their hardiness, and come from an area with a long military tradition as “Garhwal” translates as the land of many ‘Garhs’ meaning forts. The Regimental Headquarters is located at Lansdowne and is named after Lord Lansdowne who founded the regiment in 1887.

On August 4, 1914, the Great War broke out and the Garhwal Rifles, were immediately mobilised and set sail to France through Karachi. On arrival they were plunged immediately into fierce fighting and the 1st and 2nd Battalions lost so many men they were forced to merge. The Garhwal Rifles were involved in what is thought to be the first trench raid of the campaign at Festubert in November 1914. During the raid Naik Darwan Singh Negi became the first Indian soldier to win a Victoria Cross. His citation read:

‘For great gallantry on the night of the 23rd-24th November, near Festubert, France, when the regiment was engaged in retaking and clearing the enemy out of our trenches, and, although wounded in two places in the head, and also in the arm, being one of the first to push round each successive traverse, in the face of severe fire from bombs and rifles at the closest range.’

By Christmas Eve the 1/39 and 2/39 Royal Garwhal Rifles were in shallow trenches south east of Neuve Chapelle. The conditions the men endured were almost beyond description. Along the whole line the trenches were flooded and the men waded, often knee-deep and sometimes waist-deep, in freezing water and slime.

Fifty or sixty yards away across No man’s land was the 16th (3rd Westphalian Freiherr von Sparr), Regiment , an elite Prussian unit whose commander was a 19 year old boy named Walther Hennes. He described in his diary what occurred that Christmas Eve:

‘The activities on both sides died down and after nightfall ceased completely. We had received our mail, parcels and some Christmas trees from home. The choir of my company tuned up for some Christmas songs.’

Beyond the two lines of wire the Indians were watching and listening. But what caught their attention more than anything else were the lighted Christmas trees which, as elsewhere, the Germans put in rows upon their parapets. Far from seeming exotic and strange the flickering lights had a very familiar look. The Diwali festival is one of the most important of the Hindu year. The word Divali, in fact, means ‘a row of lights.’ So when the Germans celebrated and the Indians looked on, they were reminded of home.

Conditions after Christmas were miserable in the extreme, with bitter sleet and frost. The Indian troops of the Garhwal Rifles were ill equipped for the weather and suffered severely, and so it was decided to relieve them on December 27th. Their experience that Christmas had shown that no matter what race, creed or religion the soldiers held that winter all of them shared a longing for home and peace.