The Christmas Truce by Lorenzo Rizzelli 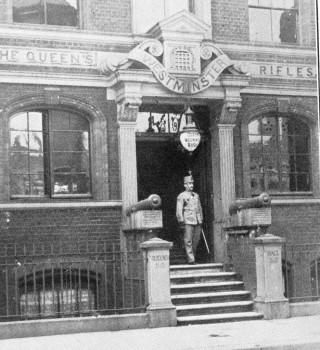 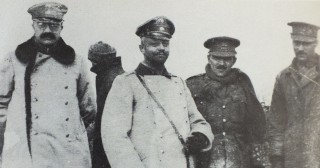 The Queen’s Westminster Rifles arrived in France on 3 November 1914, naively confident that the war would be over by Christmas and long before Company Sergeant Major Schoeberlein had a chance to join them. Despite his German parentage, Schoeberlien was feared and respected by all the men. He had been left behind at Buckingham Gate to raise recruits for a 2nd battalion. However, by the time Christmas came the Westminsters had come to learn the reality of trench warfare:

“Think of your old pal sleeping on a waterproof sheet laid on cold wet clay, with all his clothes and overcoat on – both of which are sodden with clay – and covered with a soaking wet blanket.” Rifleman Frank Morley, Queen’s Westminster Rifles, 26 December 1914.

Christmas 1914, found the Queen’s Westminster Rifles in flooded trenches opposite the Saxon 107th Regiment in the Rue du Bois. The first hints of a truce came on Christmas Eve:

“We had decided to give the Germans a Christmas present of three carols. We started the strains of “While Shepherds”. We finished that and paused preparatory to giving the second item on the programme. (a volley of rifle fire!) But lo! We heard answering strains arising from their lines!” Rifleman F. Morley Queen’s Westminster Rifles, letter December 26 1914.

“You will be very much surprised to hear I had one of the best Christmas Days I have had for years. On Christmas Eve I went to the trenches and the Germans were singing carols to our men and we were singing to them. They then shouted to us, “A Merry Christmas, British comrades. You English are fine singers.” Rifleman E. E. Meadley, Queen’s Westminster Rifles, Letter in Northampton Daily Echo and Mercury, January 15 1915.

For Christmas 1914, every soldier received a card from the King and Queen with the message: ‘With our best wishes for Christmas 1914. May God protect you and bring you home safe.’ Their daughter, Princess Mary, provided a beautifully designed and embossed brass box containing cigarettes, tobacco, a Christmas card and a photograph of the Princess herself together with a pipe. Not to be outdone, Lady Rawlinson sent a card and a Christmas pudding to the men of the 4th Corps, who were commanded by her husband. Soldiers on both sides had plenty of gifts with which to barter for souvenirs:

“A few hours before we were jolly careful to keep our heads below the parapet and now we were sitting on it, throwing cigarettes and tobacco to our enemies who wandered out into the middle of the lines.” Rifleman Ollis, Queen’s Westminster Rifles.

Many of the Germans spoke English. Rifleman A.J. Philip struck up conversation in ‘No Man’s Land with a German Officer from Catford and elsewhere a German soldier, who’d lived in the Fulham Road, was keen to find out how Fulham had been getting on in the FA Cup. He was not the only German football fan. Rifleman William Eve described how the Westminsters played football in ‘No Man’s Land’, whilst on a different part of the Front that Christmas, a Lieutenant Johannes Niemann famously described how: ‘the Fritzes beat the Tommies by 3-2.’ Many of the battalions in the line had footballs with them, some sent by clubs like Chelsea, following requests from fans.

On Christmas morning, Rifleman Treloar, of the Queen’s Westminster Rifles, returned to his trench with a sample of German ammunition and a button as souvenirs, whilst Rifleman C.H. Brazier ‘got one of them to write his name and address on a postcard as a souvenir.’

Some of the Westminsters took things too far and paid the consequences. Riflemen Byng, Sands and Pearce went missing and was sent out to look for them:

“The Bosches told us that two men the night before had walked into their trench in a state, which proved that they had “drunk of the loving cup, not wisely, but too well”. We asked that they should be returned to us, but they refused on account of the fact that these men had seen the position of their machine guns.” Sergeant Bob Brookes, Queen’s Westminster Rifles

Cross-dressing in the Trenches

They were not the only men who were carried away by the spirit of the occasion. Sergeant Brookes wrote somewhat disapprovingly of a ‘Germ’ staggering around in women’s clothing. However, Rifleman C.H. Brazier’s letter seems to suggest Brookes had mistaken the identity of the Christmas Truce cross-dressers: ‘…we found old bicycles, top-hats, straw hats, umbrellas etc. We dressed ourselves up in these and went over to the Germans. It seemed so comical to see fellows walking about in top-hats and with umbrellas up. Some rode the bicycles backwards. We had some fine sport and made the Germans laugh.’

At 7.30a.m. on Saturday, 1 July 1916, the Queen’s Westminsters stepped into No Man’s Land to face the massed machine guns and artillery of the German defenders. With no artillery support, General Haig’s plan was asking them to take the most heavily defended point on the entire Western Front. That they managed to capture some of the German trenches and hold them for 12 hours whilst being subjected to the heaviest bombardment anywhere on the Somme that day is nothing short of miraculous. Of the 750 officers and men who went over the top that day, 600 were killed wounded or missing.

In 1983, Rifleman Aubrey Rose recalled what happened to the Westminster Rifles on their ill fated attack on Gommecourt at 7.30am on 1st July 1916: ‘We went over the top and eventually arrived in the German trenches. The smoke barrage was so thick you could not see where you were going and we did not know it was a trap. They (the Germans) had withdrawn all their troops from the front line and left only a few. Many of these were dead or dying. They had deep dug outs and had set traps in them.’

Two years before the men of the Westminster had met with German soldiers and swapped souvenirs during the Christmas truce. Now that same desire for souvenirs was to prove deadly. Rose remembered that in the first German dug out there were German helmets, which the men thought: ‘…would do nicely as souvenirs. But as they touched them they were blown up. The word soon got around after that when we came to a dugout, we didn’t ask who was down there-it was just “take that Fritz! With a hand grenade.’ The contrast with the Christmas truce could not be greater.