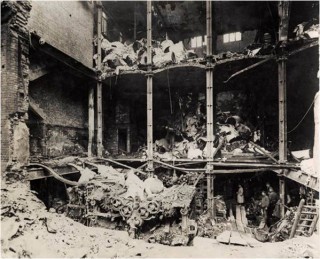 Damage to the printing presses at Odham's Press, Long Acre, as a result of an aeroplane night raid on 28th January 1918.
City of Westminster Archive Centre 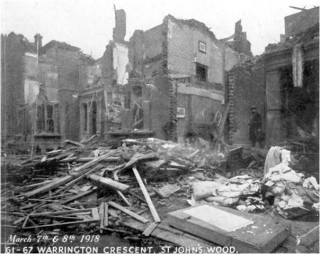 During the course of the thirty or so air raids on London between May 1915 and May 1918, the worst incident of those killed and injured by a single bomb took place in the City of Westminster on the night of 28/29 January 1918 when a 300kg high explosive bomb fell on the Odhams Printing Works in Covent Garden.

Of the fifteen aircraft which had taken off from Belgium only four made it through to the London area – three Gotha twin-engine bombers and one R.VI four-engine “Giant” bomber – but although small in number, this force was destructive enough for many in the City of Westminster to take shelter where they could. One seemingly impregnable refuge used by staff and the public during air raids was the basement of the Odhams Printing Works which was part of a strongly-constructed four-storey concrete building on Long Acre and it was over this area that the R.VI “Giant” dropped its 300kg bomb in the early hours of 29th January. This fell short of the building but smashed through the pavement in front of it and into the basement where it exploded wrecking printing presses and igniting the large stock of newsprint stored there. Many taking shelter in the basement tried to flee, desperately, but as only one of the two exits to the street was not blocked by the blast, this proved extremely difficult. The amount of debris was so great that it took several weeks to search through all the rubble for bodies but when the final toll of casualties was taken, thirty-eight people had been killed and eighty-five injured. Many of these were women and children including a mother who lost all the fingers of one hand and a leg as well as her baby.

Just over five weeks later, one more incident in the City of Westminster made headlines on both sides of the Atlantic when on the night of 7/8 March another R.VI “Giant” dropped a 1000kg bomb on a residential area of Maida Vale, then in the London Metropolitan Borough of Paddington but today in Westminster. The massive bomb destroyed four houses and caused serious damage to many more in Warrington Crescent with casualties amounting to twelve killed and thirty-three injured. Two of those killed were the American poet and lyricist, Lena Guilbert Ford, and her son. Poignantly, Mrs Ford was the person who had written the words to one of the most popular songs in the English-speaking world during the First World War, Ivor Novello’s “Keep the Home Fires Burning” and mainly because of this, and the fact that she was a U.S. citizen, her death received much coverage in American newspapers. Of course, the sort of fires which burned in Maida Vale that night, Long Acre in January and other parts of Westminster and London as a whole, 1915-1918, were not the type that Ivor Novello and Lena Guilbert Ford had envisaged in their famous song.